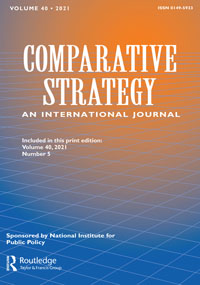 The academic journal Comparative Strategy has published my paper titled “Russia, Syria and hybrid warfare: A critical assessment. The paper aims to underline the Russian’s new role in the Mediterranean region and it is divided into three sections. First, it takes into account the notion of hybrid warfare as it, according to NATO and westerner scholars, represents the new military strategy that Moscow devises to achieve its goals. Consequently, the paper studies the current use of the term “hybrid warfare” and then, using a more historical standpoint, it will show how this concept is neither new nor useful to understand current Russian politics toward the Mediterranean region. As a consequence, the paper’s second section elaborates on the notion of gray zone warfare that seems to be more appropriate to describe both Russian military operations and its tools. The third section and conclusions highlight both the limits of the hybrid warfare notion compared to a more in-depth analysis of military and strategic history and the Russian political and strategic reach in the Middle East but also in other countries of the Mediterranean region.